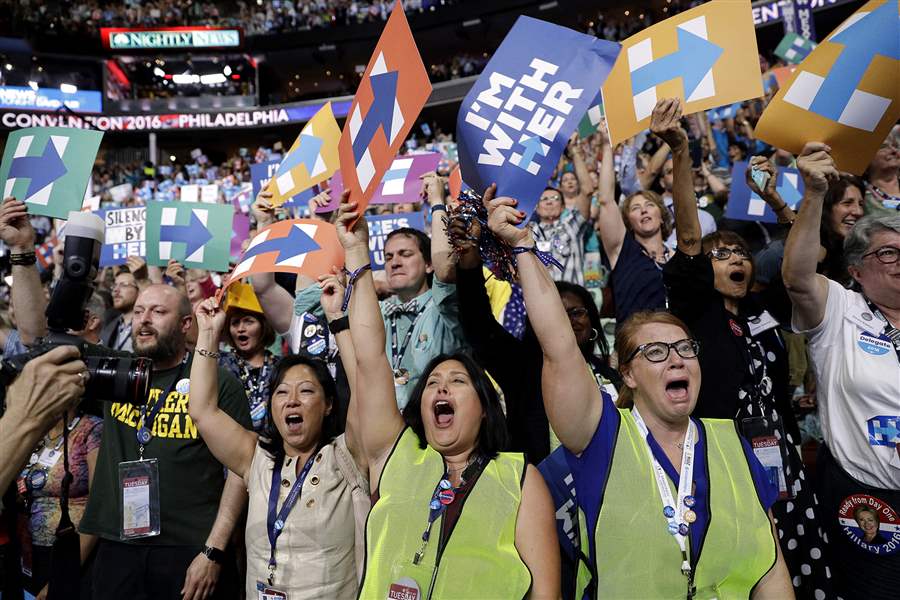 A dozen of us from the Orlando Sentinel’s CF100 are posting online commentary on the Republican and Democratic Conventions each night.  Below are my comments from Tuesday night.

Who won? To what extent the Democratic Party was able to score any significant hits to either damage Trump and his newly coalescing Nationalist Republican Party or assist Hillary in her quest to reunite the Obama Coalition behind her newly crystallizing Democratic Socialist Party remains to be seen. And frankly, despite the admirable job former President Bill Clinton did with his popular grace, charm and comfortable familiarity, his easy story-telling style, and his willingness to lay at Hillary’s lap all his major successes in life, I am skeptical that the DNC delivered on either of those fronts tonight.

But what I am absolutely clear about is who won! After eight years with the first African-American president, America, also for the first time in its history, has nominated a woman to serve in the highest position in the country and for the most powerful elected office in the world.

Whether Hillary can ultimately deliver on this historic moment will become clearer over the next few months. But regardless of the outcome, this is still an historic moment . . . and with it, America won tonight.

Who lost? Black lives clearly matter. Blue lives matter. Indeed, all lives matter. And the loss and grief of the families of those who have been killed by law-enforcement officers, gang members, repeat criminals, terrorists, or simple common thugs is no less painful based on who pulled the trigger. The issue is violence and the discussion is about safety — in our homes, cities, nation, and the world; it is not about pandering or political constituencies.

With due deference to the persuasive video shout-out for Hillary’s expertise in international relations, persuasive is not, by a long shot, compelling. And neither was the DNC’s depiction of Hillary at this particular moment in time when a significant voter block spanning all political constituencies sees the leader of this country as not only feckless in his lack of a coherent foreign policy, but provocative and dangerous in his subtle domestic class warfare.

In my first CF100 Convention commentary, on July 20 at the end of the first day of the RNC, I applauded the Republican Party for its engagement of Flyover America, forgotten in a sea of political correctness and “international erectile dysfunction” — today’s “forgotten man.” But what I also said was that Flyover America’s “disaffected, disenchanted and disillusioned” won’t win the race unless Trump broadens its appeal.

The message to the Democratic Party Tuesday night is the corollary, and why the DNC itself squandered its opportunity. Trump won’t win without expanding beyond Flyover America. But Hillary won’t win without it.

It’s a long and rigorous road to the election . . . and anything can happen along the way. But Tuesday night, the DNC stumbled in that quest.

Quote of the day: “She is the best darn change-maker I’ve ever met in my entire life.” — Former President Bill Clinton, referring to Hillary, of course.