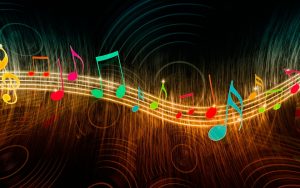 Our family was invited to the 4th of July Fireworks display at Interlachen Country Club in Winter Park.

We were all milling around, waiting for the event to occur – chatting, of course. And then it started. It just started.

There was no real fanfare or intro . . . it just simply started and away it went.

The fireworks blazoned the sky and, after an unbelievable electric storm just about wiped out Winter Park several hours earlier, the sky cleared, a beautiful moon emerged and, against that moon, the fireworks display was afoot.

Interlachen did a magnificent job on the fireworks festivities. I can honestly say that it probably rivaled all of the municipalities in town which were doing their own.

At the same time, I did question why they had spent so much money on the fireworks, orchestrating them the way they did, and not overlay music on the experience. We all know what music can do.

There is something about music which creates a connection between a beginning and an end. There is a cadence which allows you to tell a story, and, in telling a story, you have the opportunity to modulate it.

For example, in Tuscan Gardens®, our assisted living and memory care communities, we are keenly aware of the power of music to create an environment and set the mood. That’s why music plays all of the time.

After I got back from Interlachen, I immediately turned on the TV to listen to Capital Steps for their iconic Capital 4th. With that, in the midst of all of the pomp and circumstance, they still did what they do well: Fireworks in the Capital . . . Fireworks at the Capital . . . against a backdrop of the canons of Tchaikovsky.

Most of us at a certain age recall watching 10, a film that paired Dudley Moore and Bo Derek in a steamy episode against a backdrop of music. The backdrop was Bolero. I doubt if any of us will ever, from that point on, hear Bolero again without an immediate visual and a response to that very famous scene.

It’s the power of music which creates cadence.

When I listened to Interlachen’s incredible explosion of fireworks, I was immensely gratified. It was a wonderful job. At the same time, I couldn’t help but notice that action, without definition, is often less than fulfilling.

Was it a valuable moment? Of course. Was it an awesome moment? My 14 year old certainly thought so. Could it have been done better? Probably.

But it’s worth noting that the Interlachen experience gave me the opportunity to realize how compelling it is when we define parameters – in whatever manner possible – and particularly through music, to frame our experiences.