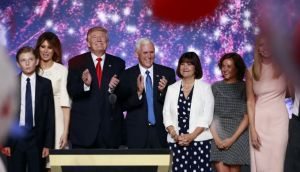 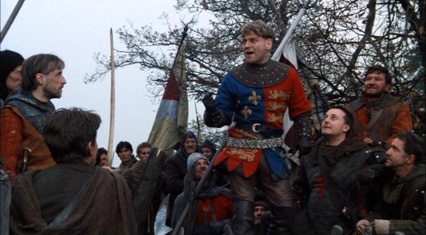 Who won? When The Donald asked, “who would have believed, who would have believed?…”, he got me. I certainly didn’t. But it happened nonetheless. And as he walked on stage, to a background of a toned-down replicant of “Non Nobis Domine,” I saw it all too clearly: Kenneth Branaugh, amidst the bloodshed and squalor — King Henry V — asking in besieging yet ironic anguish who had won the day in the morning mist at the Battle of Agincourt, told by the emissary of the enemy France that he, King Henry V, had, indeed. It was his.

It was a good day for King Henry . . . and it was a good night for The Donald, who knew the result all too well: he was the victor, and the enemies were utterly vanquished.

His speechwriters, who were internationally grounded and domestically nuanced, also coalesced around the themes, in real time, which have energized the audience . . . energized the media . . . and energized the commentary: the government’s primary responsibilities are safety at home, safety abroad, and safety in individual and free expression. As the narrative goes: elect Donald Trump and put an end to domestic and international violence, as well as providing economic prosperity for its workers. Trump “will make America rich and safe again,” said Trump.

Those are relatively obvious themes that somehow elected officials have, during these past years, appeared to miss as somewhat important to voters. And that miss is to their detriment. It has created in the past, Adolf Hitler, Benito Mussolini, and today, it creates Donald J. Trump.

It was Donald’s day . . . Donald’s night . . . and, absent some defining event, the country’s next four years.

Who lost? Camelot is dead. And the Barbarians are no longer at the gate. They’re headed to the White House in a jet with big bold gold letters on each side. They spell: T- R- U- M- P.

When, as a young boy, I saw John F. Kennedy, Jr., his young family, and the cache of illuminati he was bringing to the White House, I was enthralled, charmed, and overwhelmed by my good fortune. At 10 years old, I read Time, Look and Life magazines cover to cover and so often that the papers were worn thin, the biographies of each and every one of the great talents being brought to bear to deal with the world’s issues. I felt safe and comfortable.

When, as a young woman, my mother, Maria Giordano, the daughter of an aristocratic family in Bari, Italy, saw Benito Mussolini stand up in multiple venues and declare himself not the “Law & Order Candidate,” but the “Law & Order,” she felt safe, but not terribly comfortable. A few years later, she fell in love with an American – my father – and  emigrated to America, were she felt safe and comfortable.

Internal fear and irreprehensible anger make compatible bedfellows. And bedfellows they will be, at least for a short while. But neither fear nor anger can survive history. Not in an Italian Fascism. Not in a Nazi Dictatorship. And not in post-2016 Islamic State America!

Absent some catastrophic event, The Donald will win the election. The loser will not necessarily be our safety, but just maybe, it might be our comfort and grace, Barbarians at the gate: are we safe and comfortable, or are we just secure?

Quote of the day: “Competence is easy to find, and incompetence is impossible to hide.” Ivanka Trump, introducing her father.