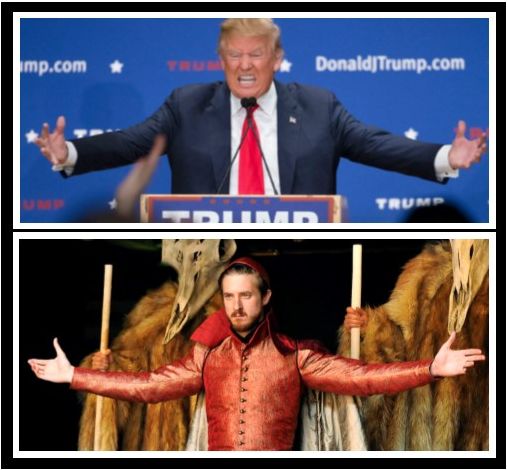 After having listened to Donald Trump in every debate, and having had prior experiences with him in a portion of the industry we both traversed, I turned to Janet the day that Trump said he was a “Christian” and “proud of it” (and that the IRS had audited him 13 years in a row because he was too good a Christian) and I wondered out loud whether Donald had any fear of Judgment Day.

Somewhere in the back of my mind I kept wondering whether his pomposity, arrogance, and incessant penchant for ridicule simply reflected showmanship or whether he really believed he was beyond challenge — both in this world and the next.

Of late, I had the opportunity to reflect on The Tragical History of Dr. Faustus, because of one of my son’s school projects. The whole Faust storyline reflects a late medieval to renaissance morality play which posits Faust as either a prime force in his own destruction or a duped pawn of the devil.

As I thought about this play I had studied years ago at Notre Dame, I wasn’t sure whether it was only the pride and arrogance Faust exhibited which was so very close to Trump’s, or something else – something more profound – in play.

It was as if Trump never had any expectation of being wrong about any of his politics or views. And more so, whether he even cared.

When Jeb Bush spoke, he spoke with the respectful recognition that he might ultimately be held accountable for what he says. When I hear Donald Trump speaking, there is no sense in me that suggests he cares whether he is held accountable or not, either in this lifetime or the next.

And it’s that which reminded me of Faust.  Because it is not so much the pride and arrogance Faust exhibited in attempting to seize the knowledge the fallen angels had, it’s the fact that Trump simply doesn’t care whether he gets caught.

Does that mean he has no view of an afterlife? Or some future judgment? Is it the feeling that what happens in this lifetime is all that matters?

I’m not accusing Trump of being a “non-believer!” I simply ask the question because his behavior elicits it. At the end of the day, Faust wasn’t doomed by the excessive pride of his intellect, or his pomposity; he was doomed because his pride simply prohibited him from accepting God’s grace. He not only aspired to have the unlimited power that knows no boundaries of decency or respect, but he simply refused to accept the possibility he could be wrong.

I will leave Trump’s popularity to the political pundits. But I wonder, as I watch this, whether we are seeing a morality play unfold in front of us with Trump trading off eternity for the “vain pleasures of 24 years.”

So, I asked Janet a very simple question: “at the end of the day, Babe, would you be prepared to vote for a person who has no fear of God?” It’s not a religious question to me, but it’s not an irrelevant question either. Would America be prepared, to elect a man who doesn’t question his own fallibility, and, even more substantially, appears to have no concern for the Judgment Day?

For Faust, his pride prevented him from repenting even in the face of final damnation. Are we that far off the mark with Trump who, if he senses God is not with him, might simply utter his iconic epithet, “You’re Fired?”