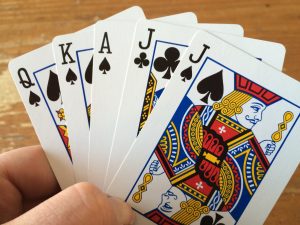 A few weeks ago, our family took a trip to Key West. In the midst of the deep sea diving, scuba, and all of the usual Key West activities, we had an opportunity to play all kinds of board and card games in the late afternoon and into the evening. Lots of fun!

One of the card games we learned to play was a game called Euchre. The objective is to win tricks, in conjunction with your partner, based upon the face value of your high cards, along with two free radical concepts: one is the notion of a trump being called which beats the rest of the suits, and the other is what is known as the bowers, which are Jacks that operate as a trump card if it is the same color as the trump suit.

It appears to be is an abbreviated form of a more complex game called Bridge.

In any event, as I was playing out the game after being told the rules, it became fairly self-evident why Euchre may be considered the “dumb man’s Bridge” (their term, not mine), although it really doesn’t have a great deal to do with Bridge at all with respect to its strategy.

In Bridge, the flow of the cards develops a rhythm between you and your partner if you’ve secured the contract or a counter-offensive side if your attempts to prevent the opposing team securing theirs. Therefore, it requires a longer view of the play. In Euchre, it represents a “take everything you can and dump the rest” mentality to the play. In other words, once you’ve gotten your contract, not a whole lot matters after that and, if you don’t get your contract – if you are Euchred – you lose a point. So, the mentality of the play is to take whatever you can take and then get out of Dodge!

In an odd sort of way, it reminded me about two different ways to play out the game of business. One mentality in business is to structure your transactions with a longer view of the strategic opportunities available in that particular business. That represents a closer mentality to how one plays Bridge. On the other hand, business is also transactional and one can approach it from the standpoint of getting what you can get first and then leaving the rest behind if necessary, a mentality closer to Euchre.

In my all too ample years of experience with business and with clients who are in business, I have seen both mentalities play out. There are those business owners who take a much broader view, sometimes too broad a view of what they are attempting to accomplish and end up sometimes successful and sometimes not.

And I’ve come across other business people who clearly operate under the premise that you pay yourself first and pay everyone else with what’s left over. Clearly, that concept also results in wins and losses.

As I simply thought through it and was being chastised (pleasantly, of course) by the more experienced Euchre players for taking too long to set up tricks, it occurred to me that the truth probably lies somewhere in between. When you take too farsighted a view of the end game, you sometimes end up with wins, such as Facebook. And when you play too short a game, as with Theranos, you end up less than successful.

Either way, the more optimal approach appears to be blending the two together in a rhythm that provides short-term viability, mid-term vitality, and long-term scalability.