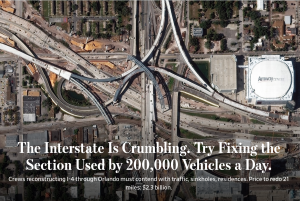 With the front page exposure in the Wall Street Journal of the $2.3 billion, 21-mile I-4 highway reconstruction project slithering through congested downtown Orlando, the rest of the country now knows what Central Floridians have known for some time: it’s a hot mess. As it turns out, attempting to update an interstate system built in 1965 when Orlando’s population hovered at… Read more.